I had been visiting this nice vet for a month or so now. He had taken a blood test when I first visited him and found my progesterone levels were low. This would have resulted in my puppies dying so I had to get injections every three days. He also used a special camera which looked inside of me. He had examined this carefully and said he thought there were five puppies. Another vet had also looked and reckoned there were four. Anyway I got on very well with this vet. He always gave Bonnie and I some treats during our visit. On this particular occasion my people handed me off to the vet. I thought he was taking me to get some extra treats which he wanted to give me and not also to Bonnie. I could see the sense in this. Anyway, I fell asleep. 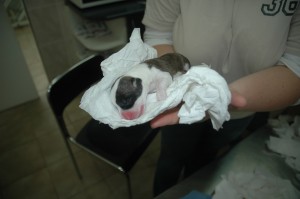 I woke up and I was lying on a table feeling very groggy. My people and Bonnie were there and so were three or four tiny puppies. I fell asleep again. This time when I woke up there six tiny puppies trying to feed on me. More sleep. I wake up. More puppies. By the time I was awake enough to walk a bit there were nine little puppies and apparently they were all mine.

It was a bit of a shock to discover I now had a family of nine pups to look after. At the beginning I was not sure what to do. My people would get me to sit in the box with the puppies. They would then get the puppies to try and feed from me. They also used warm wet cotton wool which was brushed against the puppies to help them to pee. The puppies had a lot of things which they had to learn how to do.

However, as soon as I fully woke up from the Caesarean section operation I got the hang of it. For the last two week I have been feeding and washing almost the time. Obviously I eat my own meals and these have become frequent. This is good as I have become hungrier. I sleep with my puppies and sometimes I snooze when they are feeding. 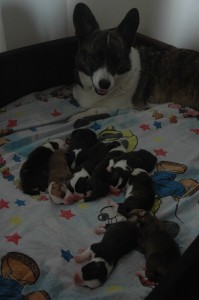 Me and my puppies

In future posts I will introduce you to the individual pups.