You might be surprised to learn that we do have a human working for us at intelligent-dog.com. He is called Peter and of course we obviously do not let him get near our keyboards when we are typing our clever and witty posts. Peter’s job include belly rubbing and distributing treats. It must be said that there are better humans on the treats front but he is OK with the belly-rubbing.

The other day he came into the office and said he had read a book. Bonnie and I were surprised that he did things like that and were even more surprised when he told us about the book. It was call “The Genius of Dogs” and was written by Brian Hare and Vanessa Woods. This book claimed to show: “how dogs are smarter than you think”. Obviously it was considerable interest to Bonnie and I as it seemed to cover a very interesting topic.

One of the things the authors describe is how they got a dog to fetch an object from another room. They even tried to trick the dog by teaching him the name of ten objects in the room but asking it to fetch the 11th object which they had not named. It is obvious to any dog reading this that, of course, the dog came back with the right object. It probably a bigger surprise to my canine readers that people are just discovering we are intelligent. This book seems to suggest that an intelligent dogs can learn about 1000 words. I am not so sure. I think that maybe 1000 words is about the limit of what an intelligent human can teach. If they had the capacity to teach more we would learn more.

The book did not go into human language but it is clear that a dog can learn words from a number of languages whether it be Polish or German or English or whatever. One of my humans actually translates from one human language to another. She is a bit more intelligent than Peter which accounts for her having this clever skill. Bonnie and I sometimes visit her office at MAart Agency and help with the work there. We don’t actually translate stuff for them but can help by cleaning plates after lunch if they wish and entertain the team there with our rendition of some traditional Corgi barking. 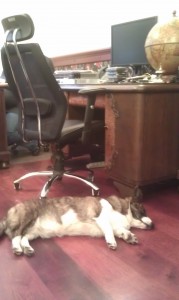 Me at work in the MAart Office

The one thing where dogs have great difficulty in is speaking in a way which humans will understand. Most of us can manage “hello” but even with that it is not always understood by our humans. Maybe those clever people who wrote the book could work on helping us improving how we speak.