Today is Easter Sunday. This is a big day for humans. In our house they have a big breakfast and one of the highlights for the humans is wonderfully coloured eggs. I have been studying these eggs last night when they were preparing them. It looks like very hard work to me. They made eggs which were brown coloured. For this they peeled the skins from a lot of onions and boil the eggs with them. The egg are then a very deep chestnut brown. The other eggs were white eggs which they boiled in the usual way and then placed in little cups with a coloured eggs. With this method they made yellow, green, pink, blue and red eggs. 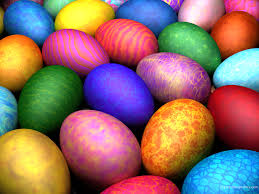 My humans can be a bit disorganised and they did not start making the eggs until late at night. Bonnie and I decided that we were going to bed and went to sleep before they were finished. Usually Bonnie gets up first and together with Sasza they will try and wake one of the humans. This morning I get up first and went downstairs. I was very surprised to see the eggs on the table. It was even more surprising to see that someone had placed a chair beside the table so I could get up there.

They obviously wanted to make it easy for me to get up and check out these eggs. So I did. I started by sniffing them. They smelt good. I decided I would just eat one. It was clear that they would not have put them on the table if they did not want me to eat them. I then ate another. At this stage Bonnie decided to help and very quickly we had eight eggs eaten. There were now two left.

I knew that the humans must like these eggs too. Otherwise why did they put so much work into preparing them. I put one in my mouth and brought it upstairs to Peter who was busy pushing up the z’s. The egg rolled from his pillow to just beside him and the coolness of it woke him. Humans do not think when they first wake up but once they do start to think they immediately jump to conclusions. In this case the conclusion was right. Peter rushed downstairs to see egg shells rather than eggs on the table.

I think he was not happy!