I had not realised that Bonnie had any interest in my blog but the other day when we were out walking our humans she started asking me about it.

‘Rusty, all the dogs are saying that you are on the Internet’.

‘I have told you about my blog. It is for dogs and it explains humans to them.’

She wasn’t so interested in that. As far as Bonnie is concerned humans are humans. She really likes them but there is no way she would ever be seen reading a blog about them. However, something had clearly got her attention.

‘Do you get spam on your blog?’ she asked.

Now this is a touchy subject for bloggers, whether they are human or animal. Spam is a huge problem. Almost every comment wants to advertise some website selling something which no one wants. This is a particularly problem for a blog like mine which is aimed at dogs. All the spam is aimed at humans. I guess they are not interested in dogs because we don’t carry money.

‘The humans complain about spam too,’ said Bonnie. ‘I heard them say this is a huge problem. They get more spam than ordinary emails.’

Bonnie told me she was not sure what that meant and asked me whether there is a huge amount of spam on the internet. I told her there was. She started getting very excited, woofing and woffing, running up and down, jumping. 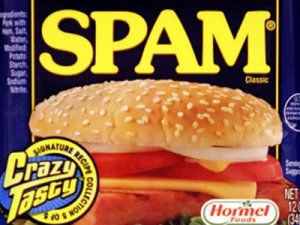 ‘Yeah, it’s obvious. The internet is full of spam. Everyone sees it as a big problem. Spam is some sort of tinned meat. You and I and maybe some other dogs can go on the internet and eat all this spam. We will have solved the big problem of too much spam and got a huge feed.’

My idea for this blog