I know it is not a very Christmassy theme. Indeed, Sasza the cat told me I should write about this as far back as November. I even planned to do it then but every time I decided I would start writing the prospect of a walk, a treat or a snooze got in the way. What is a dog supposed to do against that sort of temptation?

Anyway, here is the blog post about this major problem.

Of course Sasza the cat loves the puppies but sometimes they are a bit too puppyish if you get my meaning. She has been telling me for some time that they need one or two basic rules which will ensures peace, harmony and most importantly a scratchless cat.

According to Sasza if dogs and in particular puppies were sensible enough to understand this basic rule the world with be a much more peaceful and beautiful place to live in. 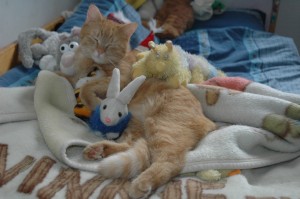 Rule 2 – Four puppies should not attack one cat at the same time!

Obviously the need for rule 2 is because rule 1 has already been ignored by four very excited puppies who are rushing after the cat and doing their best to give her a little nip which in all this excitement may even be a medium or a big size nip.

Rule 3 – Four puppies should not work in cooperation with each other when attacking the cat at the same time!

Rule 3, according to Sasza gets to the very heart of the problem. If four puppies were simply chasing her then there would be an inconvenience rather than a problem. She could simply out-run or out-climb then and in a minute or two would be safe. However the puppies place two in front and two behind and with military planning worthy of Julius Caesar corner the cat. This most definitely is not allowed.

Rule 4 – The Giant Cat Heating Machine is for the cat!

Rule 5 – If one of the staff is carrying the cat, puppies are not allowed to bite the cat’s tail even if it is within easy reach!

Sasza says that it is self-evident sometimes the cat needs to be carried from the place where she is snoozing to where she can eat and should not be disturbed during this process. Puppies on the other hand see a tail hanging down as an opportunity.

Rule 6 – The cat decides if it wants to play!

Sasza does like to play sometimes and at least once or twice a year will be in the mood where she will want to have some fun with the puppies. On these times it is permitted for an individual puppy to play with her and on special occasions maybe two puppies. However, these special occasions can end at any stage and then the puppy must stop playing and go into a corner and not disturb the cat.